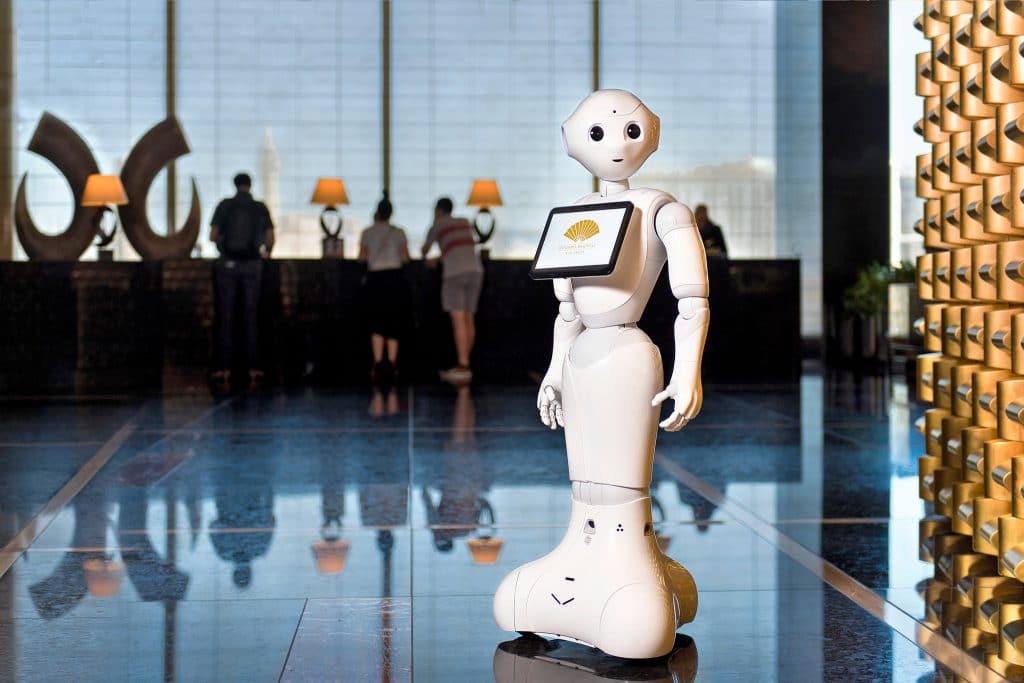 Where did our fascination with robot’s come from?

Aristotle, in 322 B.C.  foresaw the possibility of robots when he wrote: “that automata could someday bring about human equality by making possible the abolition of slavery”. Throughout human history, mankind has always been fascinated by robots and the endless possibilities they might offer.

Robots have been depicted as both good and bad in books, movies and on TV for years. There was “Robot” in Lost in Space who would get Will Robinson out of trouble. The Terminator and of course probably the most famous of all R2D2 and C3PO. I am sure we all remember the Jetsons who used gadgets of all kinds and of course Robots including Rosie the robot maid.

What is a Robot?

A robot is a machine, that is capable of carrying out a complex series of actions automatically on command.

There has always been the fear that robots will completely replace humans in the workforce and particularly in the area of hospitality.  But, many have argued that this is simply not possible as hospitality is about people serving people.

The infamous 140 room Henn-na hotel which opened in 2015 with 243 robots and 30 staff is a great example of what applications are most suitable for robots. 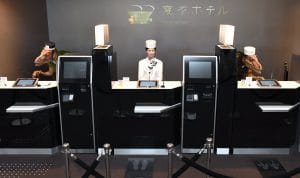 The aim of the hotel was to be operated 90% by robots. When things were operating really well they reduced total staff to 7 and it looked like it was on track to achieve their ambition. The world’s first robot hotels staff included a nodding velociraptor and female humanoid “manning” the front desk. A recycling bin droid that roamed the corridors and a chatty in-room artificial intelligence (AI) concierge (Churi). It even had mechanised fish swimming around a tank in the lobby.

However, in early 2019, the hotel laid off half of the 243 robots replacing them with humans.  The robots were replaced because they were ineffective or they had broken down. One of the best examples was the in-room voice assistant, Churi. It could cope with basic commands, such as turning the lights on and off, but appeared elementary when asked more sophisticated queries, such as flight schedules or theme park opening times. Churi would also confuse snoring as a voice command and spring into action with a response that would wake guests up.  The robots positioned at check-in were also decommissioned because human workers essentially had to help them do their jobs.

If we look at the Henn-na hotel, what it confirms is that robots won’t replace humans entirely.  However, they can be used to carry out tasks such as delivering amenities or room service to guests or cleaning and luggage transportation. With robots carrying out these tasks staff are freed up to offer true personal human hospitality.

So let’s take a look at some of the robots currently used in hospitality. This is by no means an exhaustive list. My aim here is to give you a quick overview.

Concierge Robot’s – Connie – Hilton’s robot concierge was introduced in early 2016 at the Hilton McLean next door to the company’s headquarters. Connie is an IBM Watson-enabled robot, whose role is to help hotel guests figure out what to visit, where to dine, and how to find the amenities at the property.

Jim Holthouser, Executive Vice President for global brands at Hilton says Connie will work side by side with Hilton employees, not replace them. “This isn’t about reducing staff,” he says. “That’s not where our minds are whatsoever. But if you can take 100 different routine questions off the front desk, at the end of the day, it helps them answer phones faster, it helps them check people in faster, it frees them up to actually deliver true hospitality.”

“We’re on the front end of this,” he says. “We’re kind of playing around with it to discover how we can surprise and delight? How do you better serve customers? How do you make the lives of our team members easier? I think you’re looking at the future.” 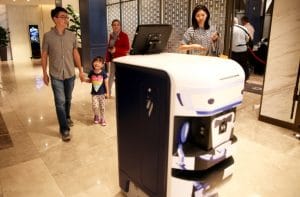 Wayfinding, Luggage Delivery Robots – In 2018 the Sheraton hotel in San Gabriel opened its doors with 8 TUG robots from Aethon.  They can escort guests to certain areas of the hotel, take luggage to the room and also deliver room service. 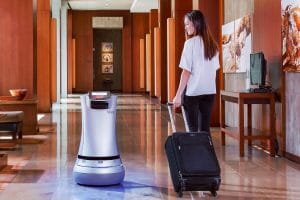 Housekeeping Robots –  There are a couple of robots helping housekeeping teams in hotels. 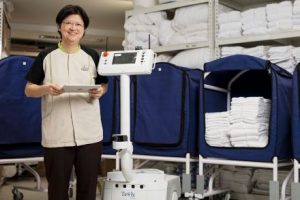 Heavy Delivery Robots – Are designed to help hotels with heavy lifting. They can deliver clean linen to the floors and take the dirty linen, which is often extremely heavy down to the housekeeping area. They are capable of handling weights of up to 600Kg. An example is Robie at The Park Avenue Rochester in Singapore. Robie, is an autonomous delivery robot that handles the strenuous manual delivery of linen. 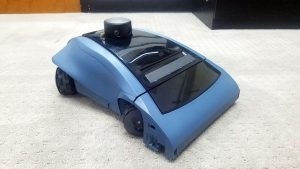 Vacuuming Robots – Remember Rosie the maid from the Jetsons. A company called Maidbot introduced Roise in 2018 to support housekeeping staff by taking the physical load of vacuuming off their task list. This reduces the time it takes to clean and provides consistency every time. Rosie can also track environmental data from temperature and humidity to Wi-Fi signal strength. 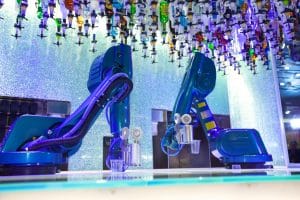 BarTender Robots – Robotic-arm bartenders are being used in Las Vegas as well as onboard Royal Caribbean’s ships.  They have been said to reduce waste/spillage by up to 25%. And they never drink on the job. 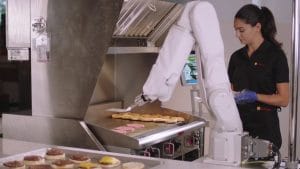 Food Preparation Robots – A number of different food preparation robots are available that can cook hamburgers, as well as make omelettes and pizzas. Flippy the short-order cook is an example.

Will the human touch ever disappear?

I don’t see robots being able to fully replace humans any time soon, nor should they.

I believe the human touch will be what differentiates hotels. It could well be that human-centred service becomes the luxury hospitality experience in the future. This might see budget hotels running largely on service automation, robotics and AI with a skeleton staff. Whilst luxury hotels retain a large, visible human workforce support by robots behind the scenes. 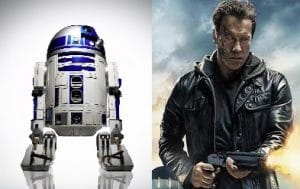 Is the look of the robot important?  At this point, I believe it is.  The robots that have been the most successful to date don’t look like humanoids. Instead, they look like robots, as imagined in 1980s films and TV, as opposed to human-like iterations, which some find disquieting. I know I do. R2D2 is less scary than the Terminator.

I asked Stephen Rodwell M.B.A. Senior Lecturer, Researcher into Robotic Service Acceptance for his thoughts on guest acceptance of robots.  He said that

“The research indicates that guests often preferred a room service robot to a person, as there was no need to put on a ‘public face’ or tip it.”

Also in COVID times robots mean less human contact, something guests are very comfortable with as it means the reduced possibility of the spread of the virus.

What is the future of Robots in Hotels?

The examples of robots currently being used in hotels certainly confirm that robots have their place. This is to support staff by undertaking the menial, repetitive and dangerous tasks freeing up human staff to do what they do best. Offer true hospitality.

Labour shortages are now at crisis levels in hospitality worldwide. This is not a short term issue and hotels have started to look at technology as the answer to allow them to continue to deliver exceptional service with fewer team members.

In many ways, COVID has accelerated the adoption of technology in the hospitality industry. It has been that much needed shot in the arm (pun intended) for an industry that is notoriously slow when it comes to the adoption of new technology.

Guests are also a lot more tech-savvy than they were a year or so ago. They are more attuned to using technology vs direct human contact. They also expect to find the same if not better technology advancements at hotels than they already enjoy at home.

Stephen Rodwell said, “Anyone who says robots won’t replace humans in the hospitality sector, either hasn’t read the research or is being naive.”

Max Starkov summed it up well in his article “Is hospitality ready for the army of robots coming to a hotel near you?”

“The robotization and automation of our industry is inevitable. I believe that within the next 10 years many hotels will operate at half the pre-coronavirus staff level and we will be seeing more and more examples of semi and fully automated hotels. The savings from labour costs and technology-derived new efficiencies will be more than sufficient to pay for the next-gen technology required for the hotel robotization and automation.”

In closing, I think robots have a big role to play in hotels. Not as humanoid looking robots that will take over everything. But instead, high tech machines that help human staff do their jobs freeing them up to deliver true hospitality.