Voice Assistants: Do They Have a Genuine Future in Hospitality?

Do voice assistants have a key role to play in the hotel industry? While the initial hype seems to have declined, it’s hard to dismiss their potential. As Amazon and Google continue to invest in their respective voice-enabled devices, the applications to travel are expanding.

Amazon and Google have both been investing heavily in their voice assistants. Last month, Amazon announced the launch of Echo Frames, Loops and Buds. Instead of being tethered to a fixed device, users will now have access to Alexa while they’re on the move.

This is an important move given that Google Assistant is already available through smartphone apps. When it comes to travel, Google has taken advantage of mobile voice search by allowing users to book and manage their travel plans, including flights and hotels.

Amazon hasn’t entered the hotel booking space (yet), but the launch of  Alexa for Hospitality in June 2018 reveals the company’s intent to become the go-to “virtual concierge” for hotel rooms.

But it’s not all plain sailing. Not all hoteliers are convinced about the benefits of voice assistants. So with that in mind, let’s look at the pros and cons of the technology in terms of its current applications and future potential.

Consumers are increasingly wary about how tech giants collect and share their data. This extends to voice assistants. This April, it was reported that Amazon employees listened to recordings of users’ private conversations with Alexa, which follows on from numerous reports in recent years about Alexa’s eavesdropping tendencies.

If consumers feel sceptical about using voice assistants in their own homes, they’re likely to be even more wary of one in a hotel room.

However, Amazon has taken steps to address concerns over user privacy. For instance, Alexa for Hospitality automatically deletes recordings every day, and hotel owners and employees are unable to access both the voice commands and Alexa’s responses. Guests can also turn off Alexa’s microphone by pushing the microphone or microphone/camera button.

All of these privacy measures should be clearly communicated to guests to make them feel reassured about using the technology.

Another common concern is the replacement of human interaction. If Alexa can attend to a guest’s every question and request, hotel employees will have fewer moments to engage with guests. While this concern is a valid one, voice assistants can actually increase the opportunities for more meaningful interactions.

If a voice assistant can quickly answer routine questions like, “What’s the Wi-Fi code?” or “When does the fitness centre open?”, hotel employees will have more time to provide attentive service where it matters most.

Following a recent trial with Amazon Echo in its guest rooms, Best Western Hotels & Resorts president and CEO David Kong reported the trial “did not go well”, citing that most guests disconnected the device and that “usage was minimal.” 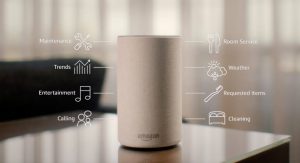 Aside from the concerns of privacy, a potential stumbling block is perceived usefulness. Alexa and Google Assistant are seen by many as fun-to-have gadgets that let them play music, check the weather, and answer trivia questions. To gain traction in the hospitality setting, voice assistants might need to provide greater utility.

I think a solution that is specifically built for hospitality and offers a touch screen and voice is far more likely to be accepted and enhance the guest’s stay rather than voice only. A voice assistant with a screen can display the Room Service menu to the guest. It can also overcome many of the privacy concerns as it can be setup as a touch screen with the option to “opt in” to use voice rather than Alexa and Google where voice is on by default and you have to turn off the microphone.

Being able to dim the lights, ask for restaurant recommendations, and stream music with hands-free interactions is undoubtedly convenient. But the true value of voice assistants may only be realised when hotels embrace the Internet of Things, utilising a whole range of smart home technologies that can be activated through voice alone.

According to a report by Deloitte, the most used function of voice assistants is searching for or requesting information. This is perhaps where the likes of Amazon and Google will become most embedded in the travel space —- as hands-free tools for finding and booking hotels and flights.

It’s a future that hoteliers need to prepare for. As voice becomes the dominant way to search, hotels will need to ensure their websites are optimized for verbal queries. This will require using more natural-language phrases that match how their target audience talks when they’re searching for accommodation.

As Amazon rolls out its new Echo Frames, Loops and Buds, hotels might even offer these devices to guests to help them explore the destination. It’s easy to imagine the benefit of asking Alexa to book an Uber, navigate to a tourist attraction, or get a recommendation about the local dining scene while on the move.

Can Voice Assistants Live Up to the Hype?

The hospitality industry seems divided on the benefit of voice assistants. Will variations of the current technology feature in the hotel room of the future? Yes, as the technology keeps evolving, and concerns over privacy are overcome, there’s no denying voice assistants have the potential to become an integral part of the smooth operation of a hotel and a frictionless guest experience.

Had to end with this one.

My wife asked me why I was speaking so softly at home. I told her I was afraid Mark Zuckerberg was listening! She laughed. I laughed. Alexa laughed. Siri laughed.