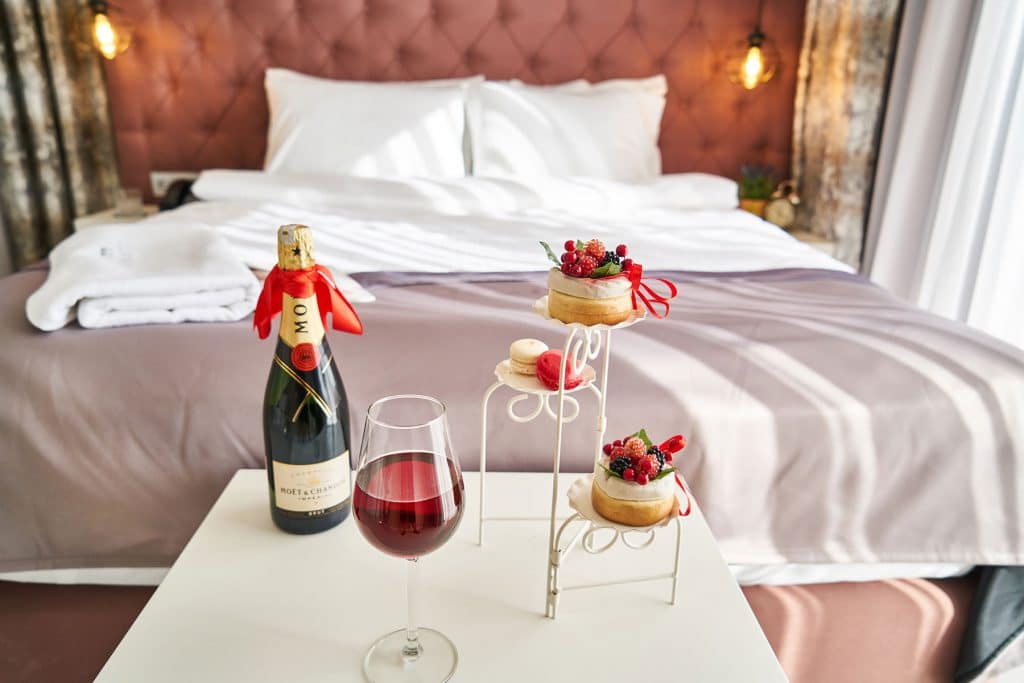 It’s The Little Things That Matter!

My wife and I recently spent a Saturday night at a hotel for our 11th Wedding Anniversary. It was a last minute decision and when my wife called the hotel, they only had the one room left, which was a suite with a spa bath. It was more than my wife was looking to pay but the girl in reservations explained the package well and it seemed to include a lot. With a friend looking after the kids for the night we decided to check-in as early as possible so that we could make the most of our time together and the hotel’s facilities.

When we checked-in, the girl whilst helpful, didn’t have much personality. My wife mentioned we were on a Romance Package, the receptionist could have at least asked if we were celebrating something. She then explained how to get to the room. She said it’s up stairs; there isn’t a lift and it’s way, way, way down the back. The way she explained it, it sounded like a negative thing.

However when we made it to the room, we found out that it was in special new wing of the hotel. In fact, it was actually a very positive thing. When we got into the room it was lovely. There were rose petals all over the floor and on the bed. The room was lit by candle light and romantic music was playing on the CD player. The French champagne was perfectly chilled; the canapés and chocolate dip strawberries were awaiting us. The bath had also been drawn, it was a perfect temperature and the bathroom was lit by candle light.

In summary, it was all very impressive and my wife was happy with the package. Generally the room was very nice. But even when staying in hotels for relaxation I can’t, help myself. I had to investigate. The desk was small but adequate to work on, the chair at the desk was at the right height, which I often find is a real issue when working on a laptop at a hotel desk. However the chair wasn’t very comfortable. So you wouldn’t want to work at the desk for too long.

The lighting at the desk was very good, including an overhead ceiling light, there were also 2 easily accessible and free power points! The room had both wired and wireless Guest Broadband. From an in-room technology stand point the TV was the biggest disappointment. It was a 21” CRT TV in a very large armoire. The set top box for the movie provider was also just sitting there beside the TV in plain view.  The suite had a Sony Dream machine CD player alarm clock. The sound was good, but I found it impossible to set the alarm and had to book a wakeup call with the front desk.

I think I know a few things about clock radios, so if I couldn’t set the alarm I don’t believe any guest could. This was a reminder that any form of technology placed in a guest room needs to be simple to use, otherwise it just creates frustration for the guest. Because of my hotel background I am probably more critical than most but I noticed that at the front desk the 3 monitors were sitting on a ream of paper to get them to the right height. They weren’t even the same brand of paper so the wrapping caught your eye. Even if the 3 reams of paper were wrapped in a brown paper they would look much better or better still if maintenance could just knock up a small wooden box painted black this would be perfect.

Near the reception area the hotel had a glass display cabinet promoting the Romance Package. It was nicely laid out and you could tell that the hotel had put time and money into the presentation. But the thing that caught my eye was the two power plugs that joined in the cabinet. With just a little more effort the join could have been outside the cabinet on the top and completely out of sight. All in all the Romance Package was great and we had a lovely night. But there were just a few little things that weren’t quite right that we will also remember.